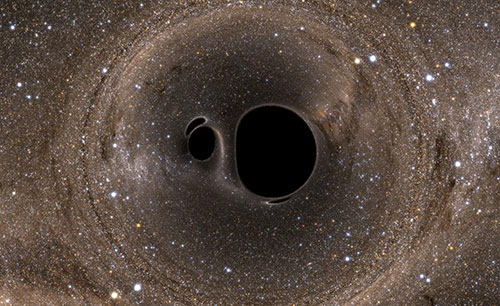 Einstein's theory of General Relativity predicts that accelerating massive bodies will produce gravitational waves, vibrations in the fabric of spacetime. Gravitational wave interferometers in the United States [Laser Interferometer Gravitational Observatory (LIGO)] and in Italy (Virgo) have already detected such waves, while detectors in India (LIGO-India) and Japan (KAGRA) will join in the hunt in the 2020s. Space-borne detectors, such as the Laser Interferometer Space Antenna (LISA) mission, are also being planned by both NASA and the European Space Agency for the 2030s. But gravitational waves are incredibly weak, affecting the distance between mirrors in gravitational wave interferometers by typically less than one part in a thousand of the radius of a proton. Therefore, the precise characterization of gravitational wave signals requires the construction of accurate waveform templates with which to filter the noisy data. We work on the analytical and numerical modeling of the gravitational waves emitted in the inspiral, merger and ringdown of compact objects, such as black holes and neutron stars, to produce waveform templates that can be used efficiently in the analysis of data. We then implement these waveform models in a Bayesian framework to determine how much physics can be extracted from actual data with both ground- and space-based detectors. 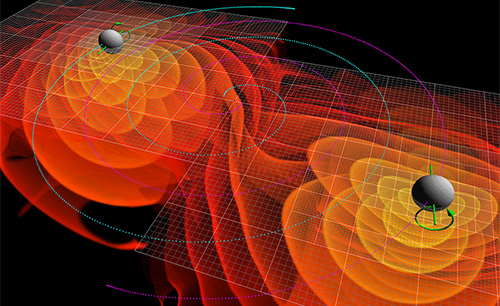 Black holes and neutron stars are some of the most fascinating predictions of Einstein's theory. These objects are so compact that when they inspiral and merge they produce gravitational waves that are strong enough to be detected millions and billions of light years away on Earth. However, the modeling of their inspiral motion and the gravitational waves they emit before merger and after merger requires the use of sophisticated perturbation theory techniques. One such technique is post-Newtonian theory in which one solves the Einstein equations in a weak-field and slow-motion expansion. Another technique is black hole perturbation theory, in which one perturbatively models the tidal effects, such as tidal heating and torquing, on a black hole or a neutron star due to a binary companion. We use these approximations, together with other advanced mathematical techniques, to understand the eccentric and spin-precessing inspiral of compact objects. We also use black hole perturbation theory to model the quasi-normal gravitational wave modes emitted after a black hole has formed as a remnant of a compact object collision. Both the inspiral and quasi-normal ringdown models for the gravitational waves emitted are crucial ingredients in the characterization of detected gravitational waves. 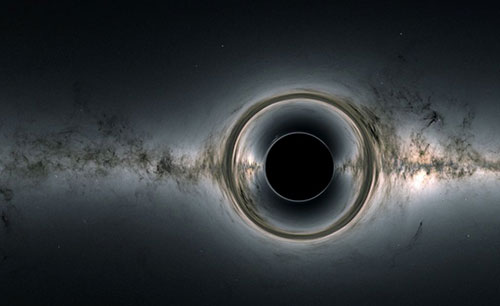 The nonlinear, dynamical and strong field regime of gravity that unfolds during the merger of compact objects, such as black holes or neutron stars, may hold the key to understanding the true nature of gravity. However, it can not be modeled analytically. To enhance our theoretical understanding of this regime, we employ full-blown numerical relativity simulations in which we solve the Einstein equations (or extensions thereof) on high-performance computing facilities. We focus on black hole or neutron star mergers in 3+1, classical general relativity, in higher dimensional spacetimes, and in modified theories of gravity. One of the pressing goals of numerical relativity is to calculate gravitational waves from promising astrophysical sources, in order to provide theoretical templates both for ground- and space-based detectors. Pioneering new numerical formulations of general relativity — and other proposed theories of gravitation — and algorithms suitable for stable, numerical solution of both the initial value and constraint equations and the evolution equations are major challenges of numerical relativity. Another challenge is developing reliable physical modeling to describe realistic astrophysical sources of gravity, cementing numerical relativity an essential tool of "multimessenger astronomy". 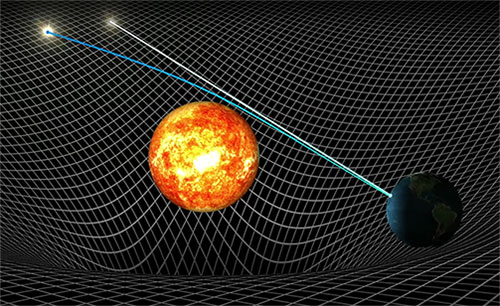 Einstein's theory of General Relativity has passed all tests we have subjected it to with flying colors. These tests, however, verify Einstein's theory in a regime of spacetime where gravitational fields are rather weak or non-dynamical and speeds are small relative to the speed of light. Moreover, General Relativity and Quantum Mechanics are known to be incompatible at a fundamental level. Gravitational wave observations of the late inspiral and merger of black holes and neutron stars provide an unparalleled laboratory to probe gravity in this extreme regime. We propose, develop and carry out tests of General Relativity with gravitational waves, binary pulsars and other astrophysical data capable of probing the extreme gravity regime. When lacking a concrete and complete gravitational model, we use effective field theory techniques to model modifications to Einstein's theory that violate one of its fundamental principles, such as parity invariance, locality, or general covariance. We then compare these models to data to gain insight and place constraints on modifications to General Relativity that attempt to provide an ultraviolet completion with quantum mechanics, or that attempt to explain dark matter and dark energy through modifications to the Einstein equations in the infrared. 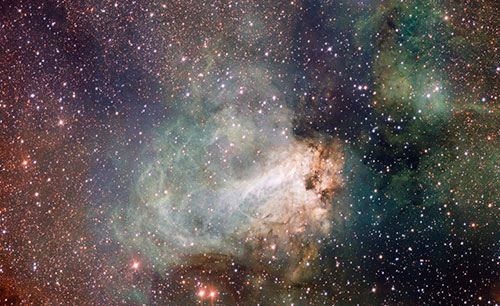 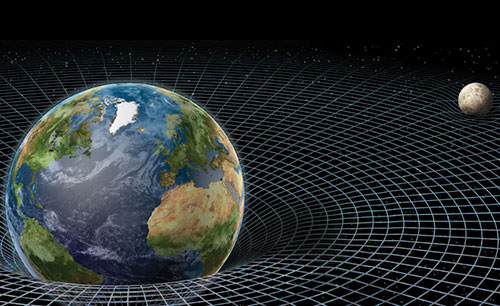 The make-up of more than 80% of all matter in the universe has remained a mystery. This elusive type of "dark matter" leaves its footprints in observations of galaxy clusters, gravitational lenses and galactic rotation curves. Yet, its composition and properties are among the most striking puzzles in modern physics. Black holes provide a novel type of laboratory to investigate ultra-light, beyond-standard-model particles that are dark matter candidates. The underlying mechanism making this possible is called superradiance: low-frequency bosonic fields are amplified as they interact with rotating black holes and can form condensates (or clouds) of dark matter fields around them. In turn this impacts the dynamics of black-hole binaries and the gravitational wave signal that they emit during their coalescence and merger in a non trivial fashion. We study the phenomenology and novel observational signatures of these ultra-light particles both on the black-hole shadow and in the gravitational wave channel using analytic and numerical relativity techniques.Dark matter matter density spikes and annihilation around supermassive black holes result in interesting cluster dynamics and potentially observable signatures that constrain dark matter candidates. 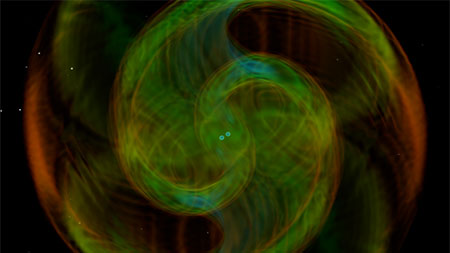 How does nuclear matter behave under extreme conditions? Neutron stars ultracompact objects born from dying stars and composed primarily of neutrons offer novel pathways to answer this fundamental question. We combine relativistic astrophysics, gravitation, (magneto-)hydrodynamics and high-performance computing to investigate the structure of isolated neutron stars, their rotation and stability, and the nonlinear dynamics of neutron-starneutron-star or neutron-starblack-hole binaries. Our numerical simulations have found that the remnant of neutron star mergers can lead to a hypermassive neutron star that is supported against gravitational collapse by differential rotation. We have also discovered analytically and semi-numerically that there exist approximate universal relations in neutron stars that have allowed LIGO to place constraints on the equation of state at supranuclear densities using gravitational wave observations of inspiraling neutron stars. We have also proved the existence of dynamically stable ergostars — neutron stars that contain ergoregions that may form as remnants of extreme binary neutron star mergers and possibly provide another mechanism for powering short gamma-ray bursts. 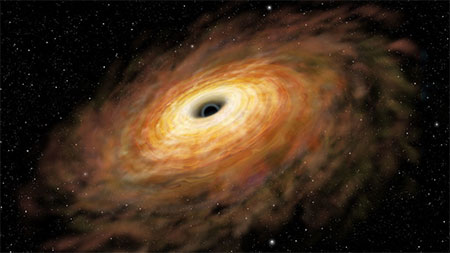 The mystery of the origin of short gamma-ray bursts was partially resolved with the first multi-messenger detection — the almost simultaneous detection of gravitational and electromagnetic radiation — of a counterpart burst associated with the observed gravitational wave signal GW170817 by LIGO/Virgo in 2017. The signal was inferred to originate from a binary neutron star merger as estimated from its mass obtained from the inspiral gravitational waveform. This conclusion confirmed the long-held belief that the engines that power short gamma-ray bursts are compact binary mergers containing at least one neutron star, either a binary neutron star or a black hole-neutron star. Our recent simulations in numerical relativity have shown that such mergers can indeed launch relativistic jets from the poles of their remnant black holes, which are crucial ingredients of standard gamma-ray burst models. The detection of kilonova radiation following the gravitational wave and gamma-ray burst in GW170817 provided additional support to the binary merger scenario. These mergers, characterized by GW radiation as well as electromagnetic counterpart emission (the holy grail of "multimessenger astronomy") are the subjects of considerable active research. 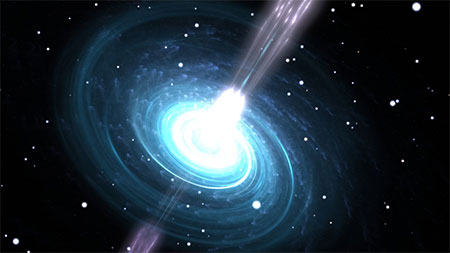 How do the powerful jets that are ejected by Active Galactic Nuclei and can span several thousands of lightyears form? What is the mechanism yielding energetic bursts of electromagnetic radiation following the merger of compact binaries? The dense matter surrounding supermassive or stellar-mass black holes alike or matter ejected in neutron star mergers may offer yet another novel pathway to answer this question. High-performance numerical simulations allowed relativistic gravitation coupled to (magneto-) hydrodynamics allowed us to produce pioneering simulations of black hole-neutron star mergers to show that such events can launch a magnetically confined jet, giving rise to short gamma-ray bursts. Our simulations of magnetized binary neutron stars have also revealed the existence of jets powered by the Blandford-Znajek mechanism, and enabled us to provide new estimates for the maximum mass of neutron stars. We continue to work on numerical predictions of observable signatures produced in the merger of compact objects and that is detectable by multiple messengers, including gravitational and electromagnetic radiation. 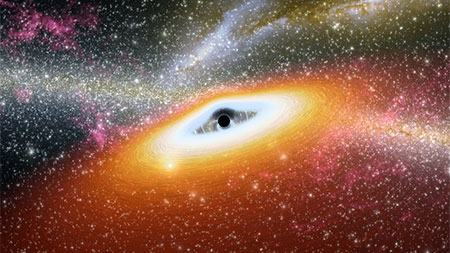 The dynamics of large N-body systems interacting gravitationally has long been a subject of considerable interest. Such systems loosely divide themselves into two general categories: collisionless and collisional. The constituents in collisionless systems, such as stars in typical galaxies, as well as ordinary dark matter in the early Universe or in galaxies and bound halos, respond to the smooth, background gravitational field of the systems in which they move. By contrast, constituents in collisional systems, such as stars in globular clusters and dense galactic nuclei, as well as self-interacting dark matter in galaxies and halos, experience in addition the cumulative effect of 2-body, gravitational scattering off distant neighbors. Their response occurs on a gravitational "relaxation timescale", and is significant whenever the latter is shorter than the age of the system. Relaxation can lead to the "gravothermal catastrophe" in bound clusters, whereby their cores increase in density and velocity dispersion with time, but decrease in mass. Of greatest interest in relativity is the stability, evolution and possible collapse to black holes of relativistic clusters and dark matter halos, the formation and role of binaries in stellar cores, including the formation of binary black holes and neutron stars, and the formation of density spikes of stars and/or dark matter around supermassive black holes and the evolution of such systems via relaxation. 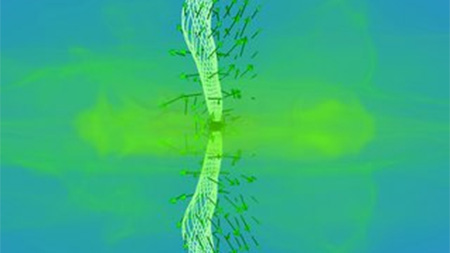 Massive main sequence stars at the endpoint of stellar evolution undergo magnetorotational collapse to neutron stars and black holes, highlighted by supernovae explosions and bursts of neutrinos and gravitational waves. Tracking this cataclysmic process has been the object of intense research for many decades. As our computational machinery advances — both hardware and software — we strive to get closer to a true understanding of the key physical mechanisms that govern the collapse outcome. The magnetorotational collapse of first generation "Pop III" stars of a few hundred solar masses may produce the seeds of the supermassive black holes observed at the centers of most galaxies and quasars. Alternatively, the collapse of supermassive stars with masses of thousands to a few million solar masses may trigger supermassive black hole formation in galaxies and lead to their eventual growth by accretion and mergers. Our recent general relativistic simulations have shown that magnetorotational collapse can result in powerful jets from the remnant black holes, supporting the notion that these events may be the origin of long gamma-ray bursts. The collapse may also generate low frequency gravitational waves that may eventually be measured by laser interferometers.